news Products A Look inside the GenV External Wastegate Range
May 26, 2020 Products

A Look inside the GenV External Wastegate Range 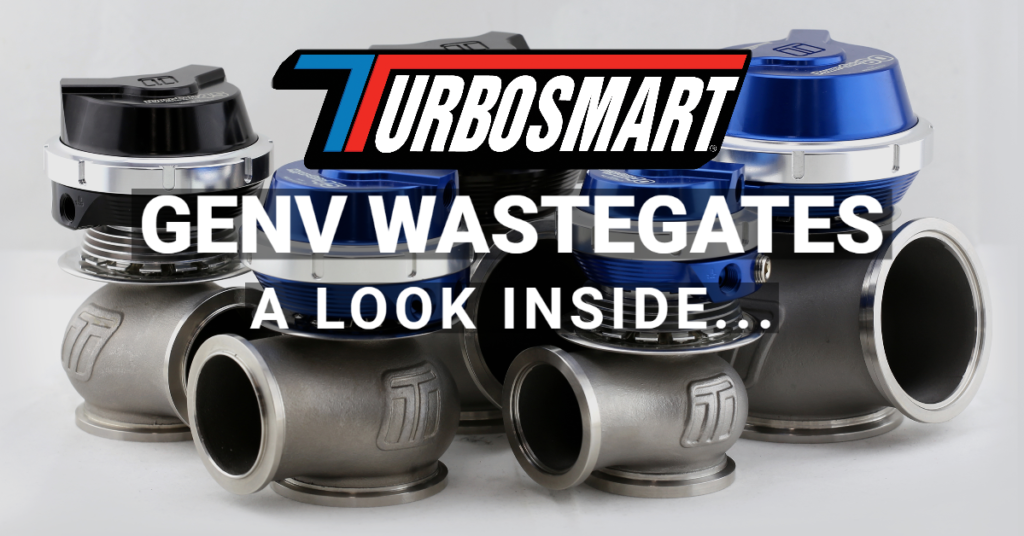 Released at SEMA 2017, the GenV wastegate range was part of 3000+ new products unleashed on the market. Just another wastegate right? Wrong. The GenV External Wastegate range has proven itself in the heat of Motorsport time and time again since release. Want to know how we did it, and what makes it different? Read on

Going back to the drawing board on an entire wastegate range with 20 years of research and development, manufacturing experience and feedback from customers, racers and motorsport engineers all around the globe meant a serious rethink – not just a tidy up! The GenV range is more than a design change or minor upgrade, it’s an architecture to build on. Taking all that feedback and experience on, the only thing aspect of design our engineers kept was the inlet & outlet flange orientation, so that just about anyone could benefit from the new advanced design.

The project of developing the GenV External Wastegate range was an intensive 2-year project, taking in years of data collection and market analysis. Each housing size from the traditional 2 bolt 38mm housing, through all V-Band solutions from 40mm up to 60mm, were CFD optimized to ensure no matter which size our customers purchased, they had the highest possible flowing valve on the market. Many CFD and analysis design features were incorporated at this time, other than the wastegate body itself. The observant eye will notice features on both the valve itself and the valve seat as well.

Why is a high flowing valve important? In simple terms, the more your valve flows, the more control you have. Increasing the flow increases the ‘tuning window’ available on a given set up, which can be further increased with improved wastegate priority. A well prioritized high flowing wastegate allows you to fit a smaller gate, and remember; #SmallerLighterFaster.

See a cut-away view of our GenV Power Gate 60mm Wastegate with compressed gas technology (below). 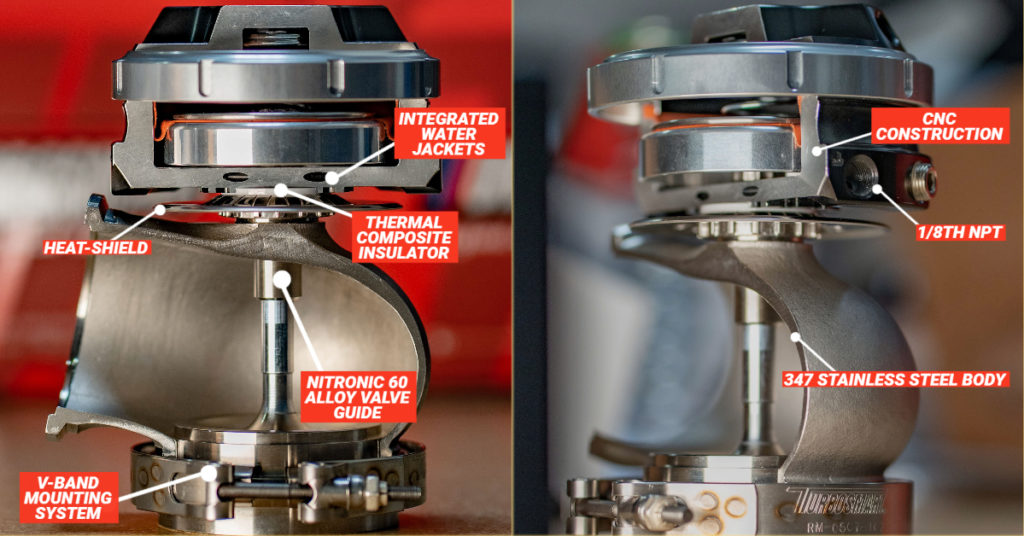 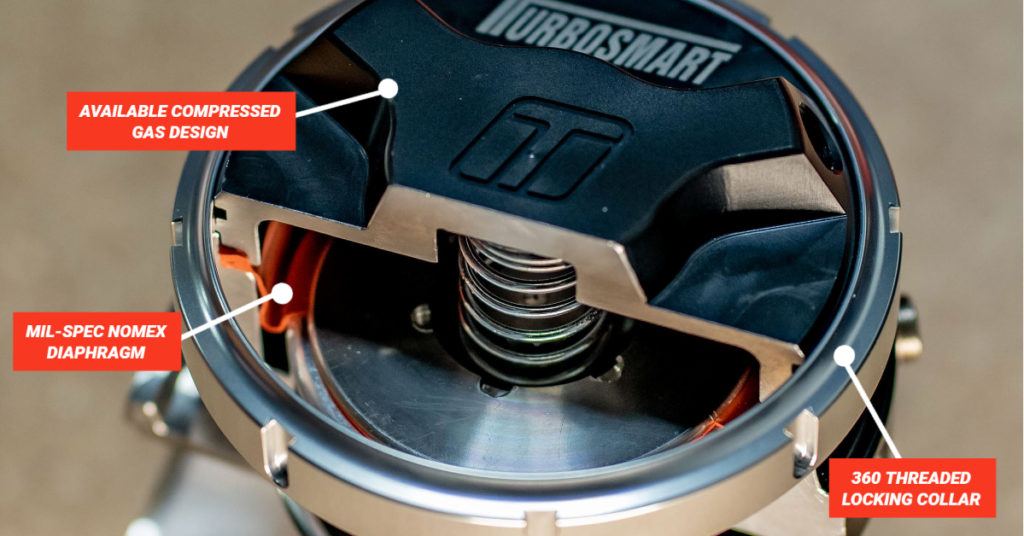 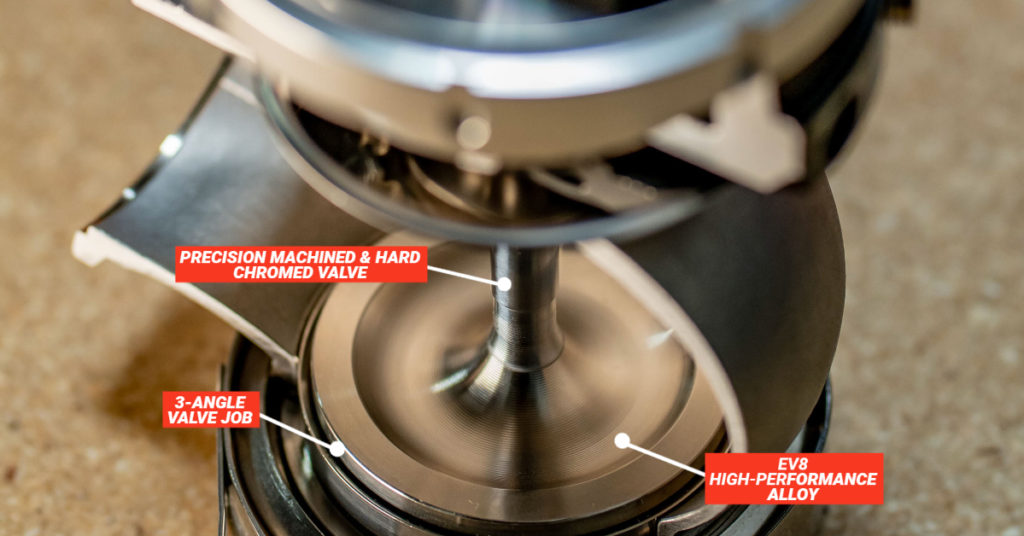 The design features on the valve also aid with the next part of the design process, ensuring the GenV range has market-leading thermal performance. There are a few principles to ensuring you have the most thermally stable and reliable wastegate on the market and they are; 1: maximizing energy transfer through the gate itself, 2; reducing the amount of heat that will then get to the actuator housing and finally, 3: Ensuring the actuator itself is robust.

A high flowing wastegate is an efficient one and this means less heat left in the gate assuming all other things are equal. On top of this, computer modelling and analysis allowed our Engineers to adopt design features that minimized heat transfer into the actuator housing and finally, ensure the springs and the diaphragm itself was ahead of the game. Further to the basic design, Thermal Composite Insulators were introduced either side of the valve guide further reducing the thermal transfer.

With Thermal Performance in hand & drastically improved over our nearest rival, the entire concept was put the test – Over 3 Million cycles were performed over our various wastegate sizes. Cycle testing, at 1200° C (2192° F) was always part of the planned program and each variant was put to the test and all predictions and modelling validated on gas stands in-house. To put that into perspective, the most demanding motorsport expectations are generally around 1100° C (2012° F) so we wanted to make sure our customers had headroom.

GenV Actuator Options at a glance

Designed to be the highest performing actuator housing on the market. Our testing indicates that our “off the self” housing easily has the best control and highest fatigue resistance. Thermal gas stand testing reveals that this housing outperforms the nearest competitor by over 200% – this is WITHOUT using the standard optional water cooling. Add in the 360° Rotatable Housing, all spring combinations included and 1/8 NPT pressure ports and you have a formidable foundation to build the range upon.

For the most demanding environments on earth, you can’t go past the Motorsport variant of our GenV External Wastegate range. On top of GenV’s market-leading thermal stability and performance, the motorsport version includes a CFD driven heat sync, further distancing the actuator from the source of heat. The heat sync is designed to dissipate the energy into the surrounding air while still proving uncompromised valve actuation and performance.

While the more common boost control strategies involve the use of an actual boost signal from your turbocharger to move the actuator around, a compressed gas set up (more commonly known as Co2, due to the gas most often used) uses an independent signal reference at much higher pressures for more control and a larger ‘tuning window’. The hardware consists of a much softer spring; however, the diaphragm and actuator housing are subjected to high pressures and require quite specific components that the GenV Compressed Gas variant is built around.

Available for the GenV standard, Motorsport and Compressed Gas Version, is a wastegate position Hall Effect (HE) sensor. Data is power as they say, and the wastegate valve position is no different. The GenV position sensor utilizes a unique hall effect, non-contact position technology that allows the GenV range to run housings with no holes to leak boost, while not being affected by thermal demands like a contact sensor would. No leaks, no melting, just reliable data.

If 26 psi of base mechanical pressure isn’t enough, the GenV range still has you covered with the HP variants. With options up to 50psi of base mechanical spring pressure, the HP is where it is at for high-pressure petrol & diesel engines. Remember this 50psi is just base pressure – With some reference signal manipulation and boost control strategy, you could be talking 2-3 times that in actual manifold pressure if desired.

The Turbosmart eWG range was a world first, providing unprecedented actuation of an external wastegate. Gone are the needs of a spring, reference ports and hose – The eWG electronic wastegate range provides the largest possible ‘Tuning Window’ without the need for spring changes & ultimately the type of boost control never seen before, all from your tuning interface or laptop. Super-fast response with a zero back drive system to reduce electric current demands, the eWG45 and eWG60 is Boost Control, changed forever.
SHOP GENV WASTEGATES