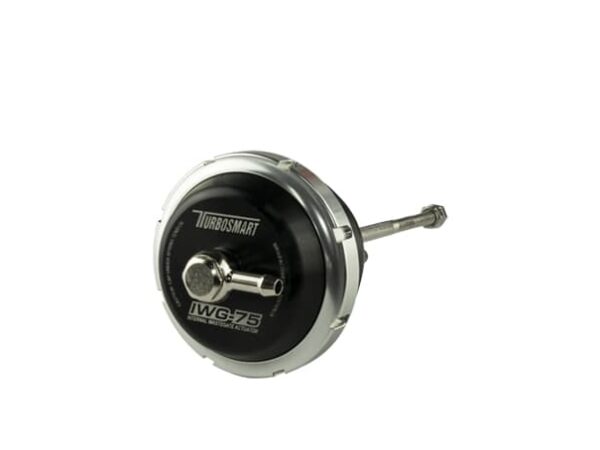 THIS PRODUCT HAS BEEN SUPERSEDED AND IS NO LONGER AVAILABLE. Refer, Instead GenV IWG (Twin Port) Wastegate Actuator Suit Borg Warner EWR Turbocharger.

Turbosmart Upgraded Wastegate Actuators have been developed to provide the maximum possible boost response for your factory frame turbocharger. The Turbosmart IWG75 Series of upgraded Actuators benefit from an increased ‘Working Ratio’ over the factory equipment resulting in improved boost response throughout the RPM range.

This Improved ‘working ratio’ is achieved through an increase to the effective surface area of the diaphragm & revisions to the actual springs fitted, resulting in greater leverage of the forces the actuator is working against (boost and backpressure) while still being super-responsive.

Upgrading with the same base pressure as the factory, you can expect a broader boost & torque curve through peak boost being achieved earlier in the RPM and being held longer into higher RPM. These improvements can be amplified with higher base pressures, however, tuning & recalibration is likely required.

Twin Port Actuators allow for a wider tuning window by plumbing a reference signal on either side of the diaphragm. The boost control strategy can force the pressure into the top cap for a higher ‘high boost’ target and, equally, force pressure under the diaphragm for a lower ‘low boost’ target. Twin Port Control allows greater boost control options around the base spring pressure. Often a much softer spring than usual can be used, resulting in an overall improvement in dynamics and response. Springs Pre-Fitted as per Description SUITABLE FOR
This is a bolt-on fitment for the Borg Warner EFR B1 Single Scroll turbocharger series.